Donald Trump loves telling us all about how fantastic the stock market has done under his leadership. And why wouldn’t he? Despite a few hiccups, it’s been a great run, no doubt (for those invested in equities, anyway).

But, in a stat that surely won’t sit well with the current president, Obama’s market fared better than Trump’s has over the same number of trading days, according to our chart of the day from the Calculated Risk blog’s Bill McBride: 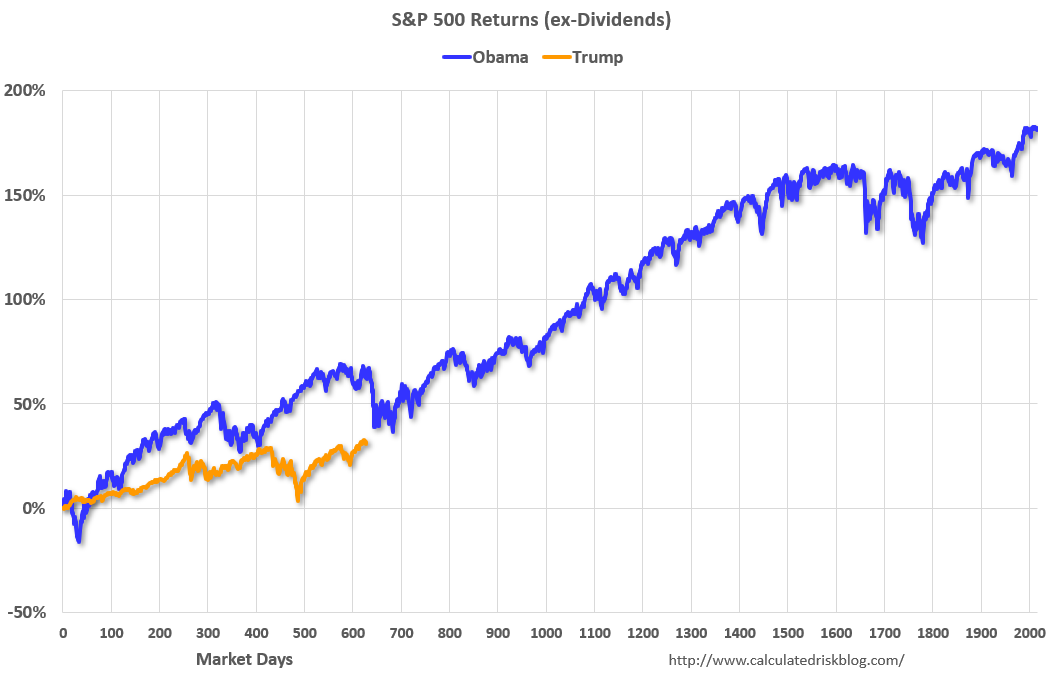 McBride, for his part, says he doesn’t believe the market is a great measure of policy performance, but he acknowledges that some, including Treasury Secretary Steven Mnuchin, do. So he updates this chart on occasion for them.

“My view is there are many measures of success — and that the economy needs to work well for a majority of the people — not just stock investors,” McBride explained in a “just for fun” blog post over the weekend.

He also pointed out that Obama’s performance was dinged up in his third year as president, which means that, should the Fed’s rate-cutting approach boost the market, as many expect, we can expect more tweets like these:

Since Election Day 2016, Stocks up almost 50%, Stocks gained 9.2 Trillion Dollars in value, and more than 5,000,000 new jobs added to the Economy. @LouDobbs If our opponent had won, there would have been a market crash, plain and simple! @TuckerCarlson @seanhannity @IngrahamAngle

In the meantime, stocks are in a holding pattern…

Author: TheForexPro.info
George Chacon AKA "The Forex Professional" lives in London, England and is a full time trader. George presents to you his abundance of trading tips in his articles. All the knowledge given in his columns are based on comprehensive skills garnered from years of engaging with a variety of trading platforms.